In September 1886, the local Konemic Lodge of the International Order of Odd Fellows

purchased the 6,720 square feet (624 m2) plot that would become 201 East College Avenue from W. S. Warner for $6,500. The Appleton Crescent wrote that the lodge was unlikely to begin construction within three years, but "when it does build it must have the handsomest edifice on College avenue".[2] By the end of 1887, plans for the building of a lodge hall were well underway.[3] The building's cornerstone was laid in a ceremony in August 1888.[4] On October 2, workman Simon Ross died shortly after falling from the unfinished building's roof.[5] The new building's first tenants moved in on December 1,[6] and a dedication ceremony was held on January 1, 1889.[7]

The three-story building originally consisted of four commercial spaces at street level, two each facing College Avenue and Morrison Street, office spaces on the second story, and the Odd Fellows lodge hall on the top floor.[8] The Fair dry goods store was one of the building's first major ground-floor tenants, opened by the Ingold brothers in April 1889.[9] In August 1924, Arthur J. Ingold sold the Fair store to William W. Frank.[10] In 1928, Frank planned to renovate the building and began an "Alteration Sale," but his parents encouraged him to move back to New York, so the alteration sale became a closeout sale and the store was permanently closed in October 1928.[11]

The Irving Zuelke Music and radio repair store, previously located at 112 South Oneida Street, moved to the building on November 30, 1928,[12] but remained there for less than a year, relocating to the Insurance Building on September 14, 1929.[13] F.S. Kelly Furniture Company, a chain of furniture stores based in Duluth, opened an Appleton location in the building, holding a formal opening on October 12, 1929.[14][15] Kelly Furniture closed the store in March 1932, and its stock was sold off by the Leath and Company store next door at 203-205 East College Avenue.[16] 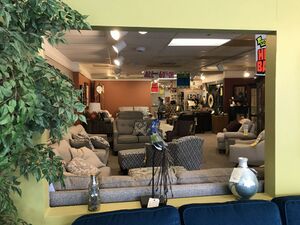 Gabriel Furniture Company originally opened in September 1928 at 343 West College Avenue.[17] After briefly moving to Neenah, the store opened in its new location at 201 E. College on October 15, 1932.[18]

In May 1963, Gabriel's opened The Pilgrim Shop, a store specializing in colonial and early American-theme furnishings and decor, in the neighboring building at 207 East College Avenue.[19] A major remodeling in 1969 covered the building's 80-year-old brick facade with beige and green metal cladding.[20] An Appleton city ordinance passed in 1971 banned signs extending more than 18 inches from buildings, including Gabriel Furniture's sign. While the ordinance gave businesses until 1978 to comply, the city did not begin to enforce the regulation until 1980.[21] After years of appeals from various downtown business owners, Gabriel Furniture's manager stated in 1982 that "we will probably just take it down".[22]

Joe and Ruby Wells purchased the store from the Gabriel family in 1988. After 91 years in business, Gabriel Furniture closed on April 29, 2019. The Wells family sold the building to the Klister development company, which they said was the only developer interested in renovating the 201 E. College building rather than tearing it down.[23]

The 201 E. College building was converted into part of Gabriel Lofts, an apartment complex, while Gabriel Furniture's other buildings were torn down to build the other parts of Gabriel Lofts. The apartment complex opened in April 2020.[24] Kodere Salon opened in one of the building's two ground floor commercial spaces in September 2020, while a branch of Nicolet National Bank is expected to occupy the other in November.[25]

Retrieved from "https://www.bluepageswiki.org/w/index.php?title=201_East_College_Avenue_(Appleton,_Wisconsin)&oldid=441095"
Categories:
Cookies help us deliver our services. By using our services, you agree to our use of cookies.