Westgate Cinema, also known as Cinema I & II, was a movie theater located at 5101 Washington Avenue in Racine, Wisconsin. Opened in 1968, the theater was originally operated by General Cinema Corporation and was built across Perry Avenue from Westgate Outdoor Theatre. Marcus Theatres acquired the cinema at the end of 1986, and closed it in 2006 to be replaced by Marcus Renaissance Cinema in nearby Sturtevant. The building was demolished in 2017 and its former site is currently under development, partially replaced by Town Bank. 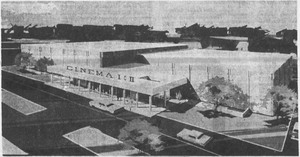 With the construction of the Perry Avenue Water Tower in 1930, the Racine Water Utility acquired what would become the site of Westgate Cinema, as well as the West Racine Post Office. In March 1961, the Papas-Spheeris Company, owners of the Westgate Outdoor Theatre, announced plans to build Westgate Family Center, a 100,000-square-foot (9,300 m2) discount department store immediately north of the theater. Although Spiro J. Papas owned the land extending north to Washington Avenue from the theater, his plan required purchasing land west of Perry Avenue from the Racine Water Department for part of the store's parking lot.[1] The Water Department agreed to sell the land for $27,750. By July 1961, Papas had come to an agreement with the Chicago-based Jewel Tea Company grocery store chain, which would open its first department store in the new building. The planned store was downsized to 90,000 square feet (8,400 m2), allowing a larger parking lot in front of the store and making the land purchased from the Water Department unnecessary for parking. Instead, Papas announced that the land would be used for a motel, with 65 to 70 units and a possible attached restaurant.[2]

Papas announced plans for a two-screen indoor movie theater next to the motel, then known as Clayton House, on May 22, 1967. The new building, intended to be finished by the end of the year, was designed by William Riseman Associates of Boston, Massachusetts and Camburas & Theodore of Chicago, Illinois.[3] After Spiro J. Papas' death on July 24, 1967, the cinema's groundbreaking ceremony planned for July 28 was postponed.[4] Constance Papas received a permit for the construction of the theater in October 1967.[5]

The general contractor on the theater's construction was Korndoerfer Construction Company. While owned by the Papas-Spheeris Company, the theater would be operated by General Cinema Corporation, as the chain's 151st location.[6][7] Cinema I and II opened on the evening of May 29, 1968, becoming Racine's first new indoor movie theater since the Venetian Theatre opened in 1928. Cinema I opened with the newly-released comedy Yours, Mine and Ours, while Cinema II opened with the 1967 Western film A Stranger in Town.[6][8] 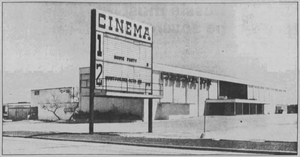 Westgate Cinema in 1990, shortly before its expansion from two screens to five.

General Cinema Corporation transferred control of all of its Wisconsin theaters, including Westgate Cinema and Regency Mall Cinema, to Marcus Theatres on December 30, 1986. The deal gave Marcus, which already operated Marc I & II, Rapids Plaza Cinema I & II, and The Park Theatre in Racine, a monopoly in the city.[10] The neighboring motel, then known as Apple Valley Lodge, closed in March 1989 and was purchased by Marcus Corporation in May 1990.[11] Marcus demolished the motel and announced plans to expand Westgate from two screens to six, by splitting the two existing theaters into four and building two more.[12] The expansion was originally intended to be completed by March 1991, but the changes were delayed while the company focused on refurbishing Regency Mall Cinema. Marcus stated that it was pushing the deadline back to December 1991, and was considering leaving one of the existing auditoriums intact, creating a five-screen theater.[13] The company ultimately decided to follow the five-screen plan, with construction beginning in October 1991.[14] The theater reopened for business on December 20, 1991.[15]

Westgate Cinema closed on September 24, 2006, with a final showing of Hollywoodland that ended at 11:39 p.m. It was replaced by the Marcus Renaissance Cinema four miles west in Sturtevant, which opened in November 2006.[19] The theater building was demolished in July 2017.[20] The first business to build on the Westgate site was Town Bank, which opened a branch at 5005 Washington Avenue in May 2018.[21] Discount Tire announced in October 2019 that it planned to build a store at the site.[22]

Retrieved from "https://www.bluepageswiki.org/w/index.php?title=Westgate_Cinema_(Racine,_Wisconsin)&oldid=237080"
Categories:
Cookies help us deliver our services. By using our services, you agree to our use of cookies.