The Racine–Sturtevant Trail is a bicycle path in the city of Racine and the village of Mount Pleasant, Wisconsin, touching the boundary of the neighboring village of Sturtevant. Extending 3.5 miles (5.6 km) from Willow Road in the west to West Boulevard near 19th Street in the east, the trail connects the Racine County Bike Trail to the North Shore Trail and forms part of Racine County's trail system. 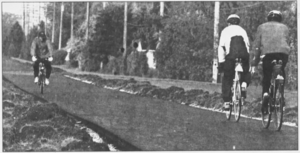 Cyclists use the Racine–Sturtevant Trail shortly after its opening in October 2000, as photographed by Mark Hertzberg.

The route of the trail generally follows the former right-of-way of the Chicago, Milwaukee, St. Paul and Pacific Railroad. The "Milwaukee Road", as it was commonly known, abandoned the Racine–Sturtevant line in 1982 during its lengthy bankruptcy proceedings. After the railroad announced they would stop service, the city of Racine began looking into acquiring the property, some of which extended into downtown Racine.[1] After the city declined to purchase the right-of-way, it was acquired by Railroad Properties Associates, a group co-founded by the Downtown Racine Development Corporation and RAMAC.[2] The eastern half of the right-of-way was divided up and sold to various property owners. Much of the western half was sold to Wisconsin Electric for the construction of power lines, and Railroad Properties Associates was dissolved after donating leftover parcels to the city of Racine in 1987.[3]

After a 1993 incident in which a 15-year-old boy was severely injured in a fall from a viaduct over Lathrop Avenue on the unmaintained line, there was a popular push to demolish the abandoned railway tracks. By 1995, the city of Racine had applied for state grants to convert the line into a bicycle trail.[3] However, disputes over ownership of the property delayed the construction, as did disagreements over whether the viaduct should be demolished or renovated for the trail's construction. Demolition ultimately took place in 1998.[4] In February 2000, the Wisconsin Department of Transportation announced a $64,000 grant to fund the construction of the trail, alongside a larger grant funding the construction of the Root River Pathway.[5] Construction took place throughout 2000, with the first phase (between West Boulevard and Green Bay Road) opening to the public by October of that year.[6]

The trail's western end is Willow Road, near the Waxdale manufacturing facility of S.C. Johnson and Son. This end lies on the boundary between Mount Pleasant and Sturtevant, and the connecting Racine County Bike Trail continues north and west into Sturtevant. Immediately east of Willow, the trail crosses the Milwaukee Subdivision railway line and connects with the Pike River Pathway before following a bridge over the Pike River. In a relatively secluded segment, the trail crosses Oakes Road and Cozy Acre Road while passing directly south of the Kestrel Hawk Landfill, before entering the city of Racine behind the Regency West Apartments. At this point, the trail connects to an entrance to Stewart-McBride Park.

The trail runs alongside Loni Lane and 21st Street behind the Regency Point Shopping Center, crossing Green Bay Road. East of Green Bay Road, the trail follows the former right-of-way of the Chicago, Milwaukee, and St. Paul Railroad through a largely industrial area, with the Wieczorek-Wright Industrial Park to the south. The next cross-street is 0.76 miles (1.22 km) east of Green Bay Road, at Ohio Street. Continuing to follow the route of the former railroad line east of Ohio Street, the trail runs along Republic Avenue through a linear park. It connects with a sidewalk crossing the gap in Kentucky Street created by the park. After crossing Lathrop Avenue, the trail connects with two more gap-filling sidewalks at Cleveland Avenue and Blaine Avenue before reaching its eastern terminus at West Boulevard and the North Shore Trail in N. Owen Davies Park.